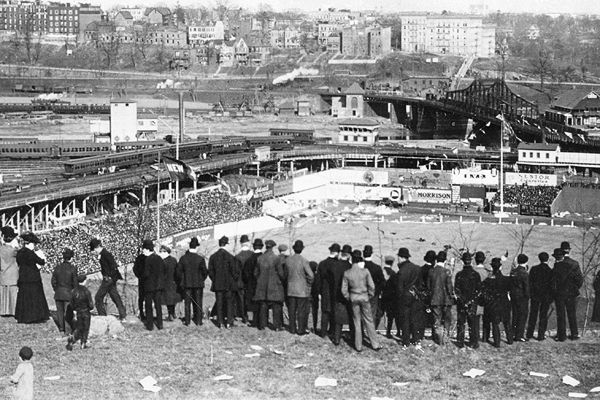 The Giants-Dodgers rivalry originated during the teams’ early days in New York, when the Giants played at the Polo Grounds in Manhattan and the Dodgers played at Washington Park in Brooklyn before later moving to Ebbets Field. The rivalry intensified after both teams moved west to California in 1958.

However, back in what has come to be known as professional baseball’s “dead-ball era”—a period from 1900 to 1919, when games were typically low-scoring  and relied on small ball strategies rather than power hitting and home runs (i.e., the pre-Ruth era)—the then New York Giants had another bitter rival: the Chicago Cubs. Never was that rivalry nastier than in 1908, the year the Cubs would go on to win its last World Series. As the Giants and Cubs finish their four-game series in Chicago today, I thought I would dredge up that nearly forgotten rivalry.

In the early 1900s, each league in baseball, American and National, consisted of eight teams. There were no separate divisions, and therefore no division or championship playoff series. The pennant in each league went to the team with the best record, and these two teams would face off in the World Series.

The end of the 1908 season saw a three-way fight for the National League pennant involving the Cubs, Giants, and Pittsburgh Pirates. On September 23, 1908, with only eleven games left in the season, the Giants played the Cubs at the Polo Grounds. Christy Mathewson pitched for the Giants,  Jack Pfiester for the Cubs. It was a typical dead-ball game that went into the bottom of the ninth a 1-1 tie. However, what happened in the bottom of the ninth was anything but typical.

With the Giants at bat and two outs in the inning, pinch-hitter Moose McCormick came to the plate and singled. Rookie first baseman Fred Merkle, who started his first game that day only because the Giants’ regular starting first baseman, Fred Tenney, had come down with lumbago, lined a single to right that moved McCormick to third base. With men on first and third, Giants shortstop Al Bridwell swung at the first pitch from Pfiester and lined it up the middle into center field. The ball was hit so hard that field umpire Bob Emslie had to dive out of the way to keep from getting hit. McCormick scored, seemingly giving the Giants a 2-1 win.

But as fans poured onto the field, Cubs second baseman Johnny Evers noticed Merkle never touched second base. In the excitement of the win, Merkle made a beeline for the clubhouse to avoid the mob of fans. Major League Baseball’s rule 4.09 states that “[a] run is not scored if the runner advances to home base during a play in which the third out is made … by any runner being forced out”. However, it was customary in baseball not to enforce this rule. Three weeks earlier, in a game between the Cubs and Pirates, Evers had tried to press the rule when a similar situation arose. The umpires refused Evers’ appeal.

Evers decided to give it another try. He called for Cubs center fielder Solly Hofman to throw him the ball. When Giants pitcher Joe McGinnity saw what Evers was up to, he rushed over and grabbed the ball from Evers and threw it into the stands.

The story of how Evers got the ball back is murky. Some accounts say that either he or another Cubs player went into the stands and wrestled the ball from the fan who caught it. Others say Evers simply picked up another ball. Whatever the case, Evers stood with the ball on second again and called Emslie over to contest the win, pointing out that Merkle never touched the base. Emslie, in his avoidance of Bridwell’s line drive, had failed to see whether Merkle touched second. He appealed to home plate umpire Hank O’Day. O’Day confirmed that Merkle hadn’t touched the base and was therefore out. The game was ruled a tie, 1-1.

The Giants were already in the clubhouse when they heard about the decision. At first, they assumed someone was pulling a prank. When they learned it was no joke, they became angry. “That dirty son of a bitch. O’Day is trying to rob us,” Giants manager John McGraw is reported to have fumed.

National League President Harry Pulliam later upheld the call. The Giants appealed to the league’s board of directors. Several days later, the board came back with its decision: Merkle was out. The game was a tie, 1-1.

Merkle was devastated and blamed himself for the Giants’ failure to win. His teammates and McGraw supported him. Fans and New York sports writers, however, weren’t so kind. Sports writers referred to Merkle as “a bonehead.” Fans booed him whenever he took the field or came to bat. The base running error came to be known in baseball lore as “Merkle’s Boner.” The end of the season was hard on Merkle. Depressed, he lost 20 pounds. He begged for McGraw to trade him or send him to the minors. But McGraw’s support of Merkle never flagged.

As the last ten games of the season were played, the Cubs knocked the Pirates out of contention for the pennant, finishing with a record of 98-55. The Giants had to win their last two games against Boston to tie the Cubs, which they did. The league then gave the Giants a choice: they could either play a best of five series against the Cubs to decide the pennant or play one winner-take-all game. Ailing with injuries at the end of the season, the Giants decided on the single winner-take-all game.

The game took place at the Polo Grounds on October 8, 1908. “The air crackled with the excitement and baseball,” Mathewson later wrote.  The nerves of players were “rasped raw with the strain” and fans “wore a fringe of nervous prostration.”

40,000 of these nervous fans packed the stadium that day. If one includes the surrounding bluffs, rooftops, telegraph poles, and elevated train tracks, estimates placed the crowds anywhere from 100,000 to 250,000. The train line on 155th Street overlooking the stadium couldn’t run trains that day because fans were sitting on the tracks. One unfortunate fan, an off-duty fireman by the name of Harry McBride, fell from the tracks 25 feet to his death. Christy Mathewson’s wife, Jane, who was carrying their small child, was nearly trampled to death in the stands.

Tensions ran high. Mounted police were called in to control the crowds. Firefighters used hoses to push back fans who tried to enter through holes punched in the fence. Fistfights broke out in the stands. Cubs players feared for their lives in the dugout as irate fans taunted and threatened them. Before the game, a number of Cubs players had received death threats. A fight broke out between the Giants and Cubs players when the Giants went over their allotted time for field practice.

Mathewson and Pfiester were again the starting pitchers. Before the game, Mathewson warned McGraw that he didn’t have his best stuff that day and his curveball wasn’t breaking. But McGraw wasn’t about to bench his best pitcher in a game that would decide the pennant.

Pfiester immediately gave up a run in the first inning, so Cubs manager Frank Chance replaced him with Three-Fingered Brown. Mordecai Peter Centennial Brown received his nickname as a result of a farming accident when he was a boy that left his right hand disfigured. Brown’s hand gave him an unusual grip that caused his curveball to break sharply. This and his remarkable control made him practically unhittable.

Mathewson held the Cubs scoreless for the first couple of innings, but in the third inning, the Cubs put up four runs against him. “What I can’t understand to this day is why it took them so long to hit me,” Mathewson later wrote. He hung on until the seventh inning before being replaced by a pinch hitter. The Giants, who had been blanked by Brown since the first inning, managed to get another run in the seventh. It would be their last. The game ended in the bottom of the ninth with the Giants going three up, three down. The Cubs won, 4-2, sending them to the World Series against the Detroit Tigers.

Cubs players had to immediately rush off the field to avoid the angry Giants fans pouring onto it. A few Cubs players got beat up. Frank Chance was hit in the throat with a bottle and couldn’t speak for two days. The door of the clubhouse was barricaded and a line of police stood outside it to keep the unruly mob from bursting in. Eventually, police escorted Cubs players to their hotel in a patrol wagon.